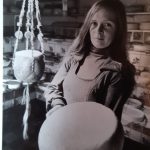 ” You have to make the cheese the land wants you to make. The very air around the farm is part of the terroir”

Interview with Norman Steele: How Milleens First Came About

In 1974 the Steeles, Veronica and Norman, moved to Milleens, a farm located near Eyeries on the rugged Beara Peninsula in South West Ireland. Although Veronica had already been making cheese before then it was only after much experimentation that Veronica found that the conditions of the West Cork area naturally suited the production of washed rind cheese.

Initially made from the milk of one cow, the reputation of her cheese, unusual in Ireland at the time, spread which allowed her to purchase more animals and so produce more cheese.  In time she was followed by two other washed rind cheese makers in West Cork  each adapting the cheese making process to produce their own variant of the cheese. 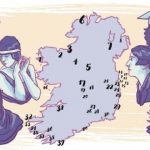 It was Veronica’s pioneering work that led to the revival of farmhouse cheeses in Ireland and to the 70+ artisan cheesemakers that exist today.  In her lifetime Veronica received numerous citations and awards including a dedicated entry in the prestigious Oxford Companion to Cheese.  In 2019 The Irish Times honoured her as one of the 40 most outstanding women in Irish history (click on map for article).

The Irish National Broadcaster RTE honoured Veronica in a short 10 minute documentary about her cheesemaking made in 1985.

Today it is her son Quinlan Steele who continues the family tradition of making this outstanding heritage cheese.