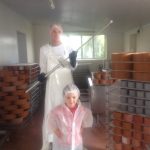 Cheesemaking is hard, physical work.  All our cheese is made by hand using traditional methods though with modern equipment such as stainless steel vats etc. The whole process takes around 3 days until the cheese is left to age in the curing room.

Milking: Our cows are milked twice a day, morning and evening.  The milk is pasteurised and allowed to cool. 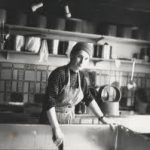 Ripening: When the milk is at the right temperature mesophilic and thermophilic lactic starters are added.  The milk is then stirred and allowed to ripen.

Curding: After 24 hours when ripening is complete, the (animal) rennet is added and the milk is rested to allow the curds to set.

Cutting: When the curds have set, the cutting by hand begins to allow the whey to separate from the curds.

Resting: There is a resting time after cutting and before draining, the curds may be washed previously with hot water.

Draining: Some whey is released to slow down the acidity and to preserve the texture of the cheese.  The pH is closely monitored and influences the temperature and stirring of the cheese.

Moulding: When cutting is complete, the curds are scooped into sterilised moulds.  The moulds are allowed to drain freely on racks and trolleys during the day.  They are turned frequently to aid draining and to ensure the cheese keeps its shape and isn’t damaged.  The curds are left overnight in the moulds to continue to drain.

Brining: The following day  the cheese is removed from the moulds and put into brine baths. 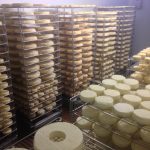 Curing: Once the appropriate time has lapsed the cheese is removed from the brine baths, dried and put into the curing rooms.

Washing: Within a short period, yeasts develop on the outside surface of the cheese to be followed by bacteria such as B Linens.  These are encouraged by the regular hand washing of the cheese with a brine mixture either from the brine bath or produced commercially.

Packing: After the cheese has reached its optimum age it is then ready for packing and labelling.