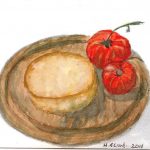 We’ve been making cheese on our farm since 1974 – the longest established farmhouse cheese in Ireland. Milleens is a soft to semi-soft washed-rind cheese made from cows milk on the rugged Beara peninsula of South West Ireland. The complex and delicate cheese is made from the milk of Friesian cows grazing the mountains and pastures of the peninsula.

The method we use to make our cheese – brine washing – is the same method that Irish monks took with them in the seventh century when they founded the great monestaries in Western Europe and created iconic cheeses such as Munster in France which is very similar to Milleens Cheese.

This surface ripened cheese should be kept refrigerated and allowed to come to room temperature for an hour or two before eating. It continues to ripen and soften for up to three months after being made.

The rind is a rich orange-brown color and frequently slightly sticky, with a wrinkled appearance.

The flavour of the cheese is less strong than the aroma would indicate. The rind is edible and has a stronger flavour than the paste.  It is often described as ‘barnyardy’. The paste is smooth and especially when young, buttery and mildly lactic in taste.  It develops more complex flavours when mature varying according to the season in which it is made.  In Spring and Summer this can be flowers, herbs and grass giving way to hay and moss for the Autumn and Winter mature cheese.